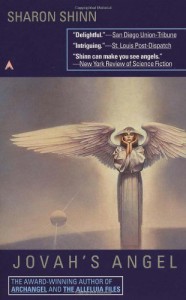 Only lately it seems the Jovah hasn't been hearing the angels. Storms have raging over Samaria leaving flood and terrible conditions in it's wake. The Archangel Delilah, flying carelessly during one such storm, plummets and irreparably breaks her wing. If she can't fly, she can't sing to the God and therefore she can't be Archangel. It is up to the oracles to speak with the God to have him name a new Archangel. Only the oracles have the knowledge to communicate directly with the God through the strange devices with the incomprehensible hieroglyphs that appear on the blue glowing screens.

Alleluia, a young angel is named the new archangel. It is well known that her voice is the only one the god still listens to. But Alleya, as she is known, feels she is woefully unprepared to be the Archangel. The Archangel isn't only responsible for singing to the God, she must also settle disputes between the various people in the land and make high level decisions.

In the meantime, the ancient devices that play the music that all angels must learn to sing to the God are beginning to fail. Alleya is desperate to find someone who can fix them. She learns of an engineer. A young Atheist named Caleb who has a burning curiosity about all things mechanical and an ambition to invent new and wondrous things.

As the two meet they work together to fix the machines and in doing so they uncover more about the beginnings of Samaria than they bargained for.

I read this book ages ago and on the strength of remembering that I generally liked it, I had given it three stars. Upon re-read, I think the three stars is still a good rating.

As I was reading it felt like it was a bit slow going. At points I had to struggle to move forward. I think it is because I knew where the story was going and was impatient for it to get there. I also though the story spent too much time on Delilah and not enough time on Alleluia. But by the time I got to the halfway mark, the book picked up immensely and really got going.

I am glad I re-read this book. I thought the reaction that both Alleya and Caleb had with their discoveries were very true to their natures. And the responsibility they both felt with their new found knowledge was also very well explored.

I especially liked the growth arc of Alleya. In the beginning she seemed very unsure, very young and unready for her challenge. At the end of the book, she was really wise beyond her years and her strength of purpose was phenomenal.
Tweet