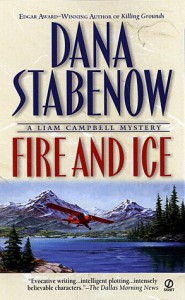 "Liam didn't just put on his uniform, he merged with it. When the last snap was fastened and the hat set just so, Liam Drusus Campbell became an Alaska State Trooper from the bone marrow out. The uniform was sword and buckler, an outward manifestation of the full power and majesty of the law, with Liam as its tool. In uniform Liam looked capable, incorruptible, and virtually invincible.

Liam Campbell arrives in his new posting in Newenahm Alaska and within seconds, steps into a murder scene and investigation. A man, Bob Decreft, walks into the propeller of his prop plane. At first it is thought to be a tragic accident but soon it becomes clear that it is a murder.

But even that isn't the most shocking thing Liam sees when he walks off his plane, that honor belongs to the face of Wy Chouinard. A woman with whom Liam was desperately in love and who walked away from him a couple years earlier. And to Liam's dismay she is neck deep in whatever surrounds the mystery of Bob's murder.

Dana Stabenow is a new author for me and one, on the strength of this book, whose works I plan to continue read. Although this is ostensibly a mystery novel, the mystery is really a backdrop to introduce us (and Liam) to the eccentric characters in the small town of Newenham. All of whom are intensely interesting both in their personal character tics and their back-stories. Most interesting is the tangled background of Liam and Wy, both separately and together. I thought Stabenow did a great job of peeking in the dark closet of each of these people and pulling out their skeletons with great skill and timing.

I was also very riveted by all the stuff I learned about Alaska as I'd read this book. Within the past three months I think I've read about three books set in Alaska and this is the only one that made me (a transplanted Southerner who grew up in the Northeast) feel that I read reading about a place that was completely alien to me and totally outside my knowledge zone. Amongst the quirky characters we also get a look at the politics and social nuances of the Whites and the Natives, written with a light yet incisive hand.

I also got a kick about reading about the Alaskan fishing industry. Again, such new information for me!

I liked Liam, I liked Wy, I liked how we got to see all the different town denizens doing their thing. And I especially liked the light touch of humor that set well in midst of some of the heavier themes of the book.
Tweet