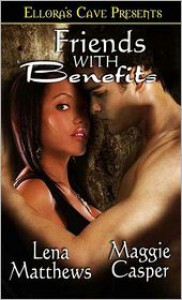 Liked this one a bit better than the previous book in the series.

Bailey has a smart mouth and a big heart. She also has a crippling fear of commitment because of the example of her much married mother.

Sebastian and Bailey met in the previous book Maverick's Black Cat set up on a blind double date with that couple. They hit if off immediately but the possibility of romance is not there. The steam-pressed lawyer Bastian is simply not one of the Bailey's types. She likes them big, muscly and pretty. She also likes guys she can leave without a backward glance. However the two of them strike up a great friendship and often hang out together.

Lately though her regular types just aren't doing it for her.
After six months of enforced celibacy, Bailey is ready to do something drastic. She asks her best bud Bastian if he'd want to be her fuck-buddy.

Sebastian is insulted. He'd love to get with Bailey but not as a tissue she can discard when she is done. And although he appears to be a straight-laced, buttoned up lawyer, he really isn't. He has certain bedroom preferences that he isn't sure Bailey can handle, despite her sexual bravado.

So he decides to invite her to a local festive club and introduce her to his interests. It is an eye opener for Bailey who finds that she just can't resist this new side of Sebastian.

Just as in the previous book, the dialogue is what really stands out. Bailey and Sebastian snipe, argue, tease and joke so well and so naturally of course these two are destined to be together! The explicit sex scenes are smoking hot but the relationship between Bailey and Sebastian is what makes the book so enjoyable.

Hopefully the next book will be Big Phil and Natalie's?
Tweet